The nominations are in, and it’s good news for Universal Tyres, as not one but two of our branches have received a nod in the Tyre Retail Centre of the Year category at the annual NTDA awards!

A major figure in the tyre industry for decades, the NTDA was formed all the way back in 1930. Its annual dinner and awards evening (often cited as the industry’s Oscars) is now entering its 87th year, with the 2016 event shaping up to be one of the best yet, recognising the achievements of businesses across the UK operating within the tyre supply and replacement field.

Hosted by TV presenter Suzi Perry, the awards will be held on 6th October at prestigious new venue The Vox, close to the NEC in Birmingham.

Award categories this year include

– Tyre Retail Centre of the Year

– -REACT Roadside Technician of the Year

– Truck and Agricultural Tyre Supplier of the Year

– Aftermarket Equipment Supplier of the Year

– Industry Marketing Campaign of the Year

– Tyre Wholesaler of the Year

– Tyre Manufacturer of the Year

Universal Tyres are delighted to receive recognition for the services that we provide customers across the South East, and the exceptional quality of the work carried out by our Chelmsford and Greenwich centres (pictured below) is replicated throughout every branch. 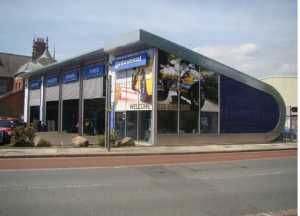 Stefan Hay, NTDA chief executive, described all entries to the Tyre Retail Centre of the Year category as “truly exceptional”, explaining that he was “filled with pride to run a trade association that represents members with centres and employees of such outstanding quality”.