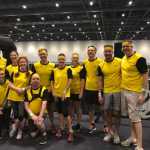 At Universal Tyres, we’re no strangers to getting involved with charity events and raising money for some fantastic causes. Earlier this month, a team from Universal Tyres took part in the London Rat Race, supporting the Ellenor charity. On Saturday 12th of August, 2017, our team took on the 10km challenge which was filled with physically demanding, wet and wacky stages. Stages included crawling through foam-filled washing machines and quick rope climbs. We raised a whopping £3k for Ellenor, a charity which helps families who are facing terminal illness. This brilliant organisation helps people and their families to make the…

This year, Universal Tyres is proud to announce our support for Ellenor, a local charity that does incredible work in Kent to provide quality end-of-life care to patients and families. To do our bit, Universal Tyres is entering an 11-strong team in the 2017 London Rat Race – an intensive 10 kilometre dash across the capital, complete with obstacles and a dip in the Thames. About Ellenor Since 1985, Ellenor Lions Hospices has become the largest hospice service providers in Kent, and offer end-of-life care and support. Ellenor believe every person facing a terminal illness deserves the best care available…

Universal Tyres are proud to announce our support for Wooden Spoon’s Supporting Tomorrow’s Superstars campaign! Since the 1980s, the children’s charity of rugby has been dedicated to providing easier access to sporting facilities for children with disabilities or disadvantages from all backgrounds throughout the UK and Ireland. In 2017, Wooden Spoon are embarking on one of the biggest campaigns yet. To enable more kids than ever before to get involved in wheelchair rugby, Wooden Spoon are aiming to raise £95,000, enough to buy a new rugby wheelchair for every club in the UK and Ireland. That’s an amazing 19 wheelchairs…

The NTDA Awards: Chelmsford Branch comes out on Top!

Back in August, we spoke about our nomination for Tyre Retail Centre of the Year at the annual NTDA awards, and are now delighted to report back on the success of our Chelmsford branch, which scooped top spot! Following on from being awarded Michelin Certified Centre status (along with seven other Universal Tyres branches) earlier in 2016, our Chelmsford facilities are going from strength-to-strength, and this latest accolade is testament to the hard work put in by the whole team. Universal’s own sales and marketing director, Simon Wright, describes the Chelmsford branch as the “‘new kid on the block’ in…

The nominations are in, and it’s good news for Universal Tyres, as not one but two of our branches have received a nod in the Tyre Retail Centre of the Year category at the annual NTDA awards! The Awards A major figure in the tyre industry for decades, the NTDA was formed all the way back in 1930. Its annual dinner and awards evening (often cited as the industry’s Oscars) is now entering its 87th year, with the 2016 event shaping up to be one of the best yet, recognising the achievements of businesses across the UK operating within the…

Welcome to the Universal Tyres Blog

Here at Universal Tyres we are delighted to introduce you to our brand new blog! As one of the region’s largest tyre distributors, we are dedicated to exceptional levels of customer care and believe that, in order to deliver this, we must remain as innovative as possible. As such, we are constantly updating the way we work, introducing new products and processes and reviewing industry practices – and our new blog is the perfect platform upon which to inform all our customers of this! Each month we’ll be updating you with all of the goings on from Universal Tyres, informing…

Our Other Services Include:

We can service every make & model of car & van 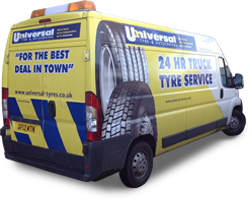